When I first asked to work with Barbara at Body Dynamics, it was because I was so embarrassed by my cardio fitness.

But Barbara (who is a wizard and deserving of more posts just on her) looked at me critically and said, “… and I think we can take some weight off you, too.”

“No,” I said instantly. “No, really – you can’t. Believe me. I’ve tried. Every diet I’ve ever been on, I’ve gained the weight back plus twenty to forty pounds more. I wouldn’t be this fat now if it hadn’t been for diets. I can’t afford to lose any more weight. Let’s NOT try.”

She nodded, but I could see the determination in her eye. “Another one I’m going to have to show,” I thought. “Well, I’m NOT dieting – I don’t care WHAT she says.”

When I said that, in June of 2016, I weighed 260 pounds – a shame-filled number that I sick up today in confession because guess what happened this morning?

And I never dieted – not a mouthful. I ate ice cream throughout.

Granted, the fastest change came (four pounds in the last two weeks!) when Chip the nutritionist finally showed me the effects of sugar on my zinc levels (zinc! Zinc! O you are my master now!), but the first eighteen slowly melted over the course of a year without me noticing.

And what else happened? See the photo. That’s me, bravely showing my belly in a lock-all-the-doors-first selfie. Instead of a vast, white expanse of flesh, there are now these marginal contour lines in the vast, white expanse. It’s like – when it snows, you can see these soft lines in the surface that show where the dog’s Frisbee is lying on the terrace. You can’t see the Frisbee, but you know that something’s down there, buried under the snow. And that’s my belly now.

I can feel the abdominal muscle down there; it’s a ROCK. I think I have a six-pack under the blubber. Me! My shorts are baggy; I have to hold them up with a belt, which is on the tightest notch. And when I train with Barbara and I warm up on the elliptical (admittedly on its easiest setting), I’m usually annoyed that we only get ten minutes for that; I can and want to go longer. Cardio fitness coming along!

I shake my head at the thought. Barbara is a wizard, I’m telling you. 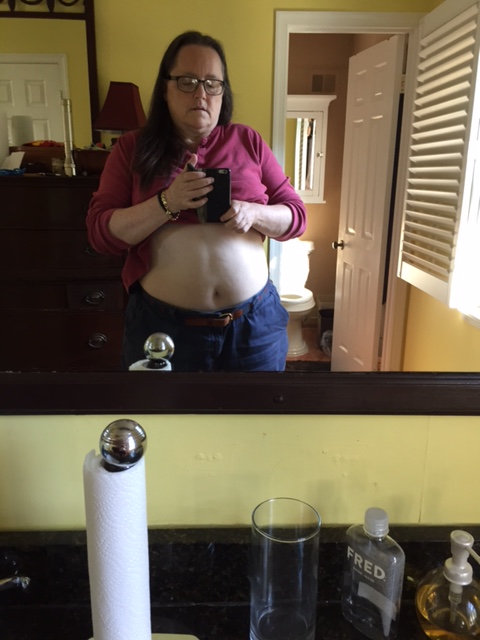