“I’m so glad,” my mother said to me yesterday, “that you and your sister are FINALLY taking your weight seriously.”

I have two sisters. Twig finds bliss in exercise and now looks like she could kick your ass after perfectly landscaping your garden and finding just the right scarf for your outfit. That’s definitely not the sister Mom was referring to.

The other sister, Lexie, has a harder row than me, even – she started out slim-hipped and sporty and has since come to the “I can survive a famine” school of hip-and-butt plenty. So she knows what it’s like to be … well, normal. She’s tasted it and now it’s been taken from her. That’s tough. She and her husband are currently grinding their way through the theory that if you rigidly watch every single thing you eat for six days and then have a cheat day once a week, you can maintain your sanity and your weight at the same time. I wish her great good luck with a plan that didn’t help me at all.

Mom is the worst of all – she’s a Born Again. She actually lost weight in her adolescence and spent most of her life slim and lovely. Therefore she believes that weight is a moral failing. You COULD do it. You’re just not trying hard enough.

Mom’s comment that Lexie and I were FINALLY taking our weight seriously rankled, and I replied “I’ll pay you five bucks if we can stop this conversation right now.”

“Oh,” she replied, her huffy empress crown descending invisibly onto her head, “I thought YOU wanted to talk about it.”

She’s a million years old and there’s really no benefit to arguing, so instead I’ll argue with her here. “Finally?!” I would scream. “FINALLY?? Shall we review what my genetic make-up has subjected me to over the last 57 years?? Not to mention YOUR disappointment in having The Fat Daughter?!”

No – that’s tougher on her than I want to be… but let’s review the bidding:

Jenny Craig – I was 180 pounds when I walked in the door, alongside my husband-to-be and a dear friend. The three of us ate dehydrated food for months. I lost nine pounds and discovered the concept of the Cheat Day. Get weighed in and immediately repair to a restaurant where the food was not at all dehydrated. Eventually eating out of boxes wore on all of us and we stopped – at which point I gained the nine pounds I’d lost plus an additional thirty.

Weight Watchers – I was 210 pounds when I started. I calculated points like a trackside bookie. I learned the secret value of vegetable soup, which would at least fill me up. I cut my restaurant portions in half. I sat in meetings and dutifully examined the empty boxes that other people brought to show off something they’d found that had fewer points and better taste. Fanaticism and the fact that it was working pretty well for my husband kept that going for quite a while. I don’t remember how much I lost, but two months after stopping, I was up to 230 pounds.

Gall bladder – this was the event that taught me just how powerful negative reinforcement is. I had a hot gall bladder; if I combined the stress of being a freelance fundraising copywriter with any fat at all, tiny grit in my gall bladder would whoop out of the barn and raise all kinds of hell in town, scaring the womenfolk. Tremendous pain. Since I had to be anesthetized to have it removed and since my husband and I had decided one kid was all we dared visit upon the world (my son was a handful; charming, but busy), I decided to get the surgeon and the gynecologist in the same operating room together and have my tubes tied at the same time as they popped out that gall bladder. A twofer. While waiting the three months for them to clear their schedules, I was so afraid of the pain from a gall bladder attack that I grew to fear dietary fat. I lost forty pounds – my red letter weight loss – and was told by a friend that my butt looked “positively sexy” in jeans. No! Really?! Operation – immediate gain of fifty pounds. Now up to 250.

Self-guided exercise – finally aware that diets seemed to have a dangerous effect on my body, I spent 437 consecutive days getting at least one hour of exercise every single day. I did “Dance, Dance Revolution” in the basement. I did yoga CDs. I walked around my neighborhood like an obsessive. I tried to teach myself to tap dance, but at least in the beginning, that’s not sweaty enough while learning, so I abandoned that. Same with a tai chi DVD; good exercise, I’m sure – but not enough gasping for air to qualify as a work-out. Through ice storms and rain and work deadlines and complaining child, I set aside time every day to grimly exercise. On the 438th day I forgot to put in my hour, and having broken my record, the entire thing came to a crashing halt. I lost about three pounds and tightened up some muscles.

By the time I got to Body Dynamics, I was too pudge to even be called Rubenesque – the best of the words intended to disguise the fact that I’m fat. I defined my sense of self by how thoroughly I’d failed at “taking my weight seriously.” I have tremendous arrogance about my brain, but hopeless shame about my body.

And now I think that it has nothing at all to do with will power or moral failings. I think I didn’t have the knowledge or skill to care for my kind of body the way I was assured would work. I have a genetic predisposition that is different from my mother’s.

Sooner or later science will catch up and there will be big headlines that shout what shame-filled fat women have known forever: HEY! WE ARE NOT ALL THE SAME! What works for some people is the kiss of death for others – who knew??!

So I come with defeatist baggage. I trust that the many large and kind brains at Body Dynamics can help, but I remain astonished to see a lower number on my scale… and I’m still not sure I’m not just visiting these lower numbers on my way back up to the big digits. I hope it’s permanent.

And I’d like to shake my fist at my mother and let her watch my overlarge-but-now-muscly rump as I stalk grandly from the room. Won’t happen, of course, but that’s the fantasy.

Image of “Flaming June.” She’s by Frederick Leighton, not Peter Paul Rubens, from whom we get the phrase “rubenesque.” Flaming June is a better color and I’ve always liked that expanse of thigh. She’s a woman of substance. Like me! 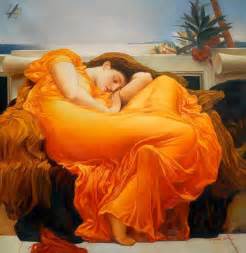