I’m talking clever HUMBLE brags – but they’re brags all the same. “I’ve only sponsored 17 orphans; I feel so bad that I haven’t done more.” Or “isn’t it awful how hard it is to get the new hood on my Mercedes waxed?”

(Full disclosure: I DO need to get the hood on my car waxed, but I have not sponsored 17 orphans.) (Just one.) (Humble brag.)

But I do NOT love to disclose my failings. Who does?

So I’ve been silent. A few people were kind enough to notice, which is very flattering. (I think that’s a humble brag, too.) I’m doing home renovations (painting, repairing, etc.) and it’s caused a typical amount of chaos. But chaos, it turns out, is not typical for me. It reminds me of the post-dead-husband period, when I was in deep mourning and processing that by purging all the crap out of the house.

Now I’m surrounded by the crap of moving the contents of three rooms into two other rooms, and I find I’m having flashbacks to that time of shock and confusion. I felt (and it was all feeling – no logic) that I’d fallen back into a very bad time and mindset. So somehow I stopped doing my home exercise program. (Because – where the hell is the yoga mat? Where did I put the weights? That theraband could be ANYWHERE. I give up. NOT MY FAULT.)

Then I had to haul the kid back to college and then I went further to visit my college roommate, and somehow I lost everything that Chip (the nutritionist at Body Dynamics) told me about eating to benefit my body. I had a total Road Trip mentality; by the ride home I made a pit stop in which I deliberately walked past bottled water and small packets of nuts and instead willfully bought an extra-large hot chocolate (because they didn’t have tea – Erwin, Tennessee. Sheesh.) and a packet of chocolate doughnuts.

You really can’t get much lower than that in the downward spiral. At least, I can’t. (Humble brag. No Mad Dog 20-20 or bath salts or child hookers HERE. My heroin is demon sugar.)

I was indulging like a junkie, and feeling BAD like a junkie because even if I tried to suppress the knowledge of what all that sugar was doing to the house party in my gut, I KNEW I was doing myself harm – and after being such a good steward of my health for so long, too. So I fell silent.

Because who likes to expose shame?

But then – good things started to happen despite my despair. First, I have steady appointments with trainers at Body Dynamics (Barbara and Grace, both of whom refused to believe I was now so decrepit that they ought to treat me like a first-time client) and two exercise classes there – and I kept all of those appointments out of habit.

Then I started with a new doctor. (I used to be with Carefirst Blue Cross, but they decided they could get away with almost doubling my rates in the new year so I gave them the boot and went with Kaiser Permanente.) Of course they did blood work, and my results came back with very encouraging numbers.

And I remembered: It’s not a week – or even two – of indulgence and shame that brings the cholesterol and A1C up to “you’re in trouble” levels. You can screw up – you can get into a vicious downward spiral of emotion and gluttony and sloth…

…but spirals go upward, too. You don’t HAVE to go down.

And it doesn’t matter how long you’ve been going downward. You can go upward with just one tiny effort, which stops the downward curl. Every choice is a new opportunity, and every good choice makes the next decision a tiny bit easier.

So I’ve trotted up and down the stairs for five minutes both yesterday and today. (Today was actually five and a half minutes because I forced myself to do an eighth lap – and those extra 30 seconds may seem brief to you but they’re a badge of total, panting, sweaty honor to me.) (Humble if pathetic brag.)

I’m doing my HEP again. I’m avoiding grains and sugars when I can. I’m drinking my water. I’m paying attention and remembering that beating myself up doesn’t help. I have forgiven myself and am continuing my journey.

And I’m beginning to clean up after the renovations. That feels like progress.

What a long, whining blog. You get brownie points for getting this far, because unlike real sugar, brownie points don’t upset the house party in your gut at all. 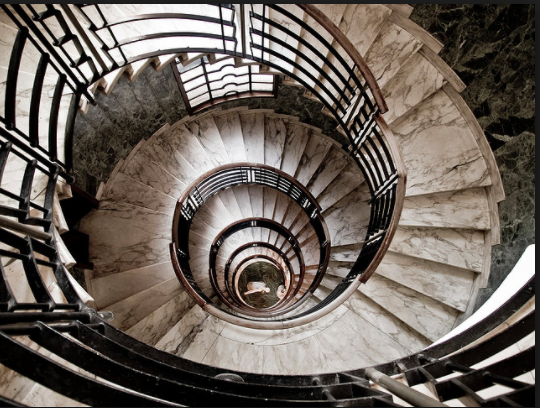