Long ago in the time of dinosaurs and mastodons and cuneiform (yes, I know that’s an impossibly long period of time; stop harshing my literary buzz with your critical reality), modern agriculture had not yet filled every shelf with loaves of Wonder Bread and a dizzying array of Hot Pocket flavors.

Seven years of plenty were followed by seven lean years.

(This may not be factually correct; I draw the numbers not from the Bible but from Charlton Heston Bible movies from my childhood, in which Edward G. Robinson would improbably gargle “Where’s your Messiah now, see?”)

My brain is pinging like pinball. MY POINT IS that once there were famines.

When there were too many people for the available food, the ensuing starvation would kill off all the weak and slim-hipped. People fortunate enough to have the metabolism to pack on the fat could endure the lean years while those who thought the plenty would last forever would have to crawl off into the wilderness (there was a lot of wilderness back then) and obligingly die without issue.

Pudgy girls got all the dates. Plump children were more likely to survive. Sculptors made little goddess figurines of women with enormous butts and life-rich boobs. This is the Venus of Willendorf; she’s just a few inches tall and is perhaps the earliest form of art in the world. She’s the absolute acme of beauty from about 30,000 years ago. 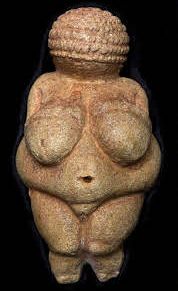 And then? Modern agriculture. Diversification of labor. Civilization. No more famines, mostly.

Suddenly the ability to store more energy than you needed was a BAD thing. So, taking massive steps across the stream of time, we see the progression of the concept of beauty is: The Venus of Willendorf… 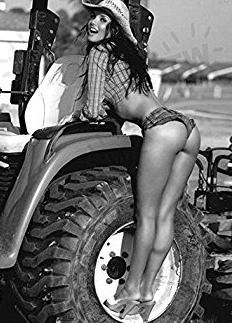 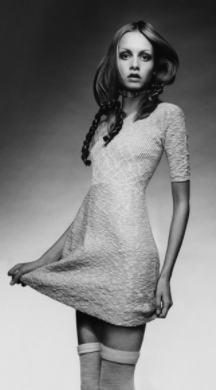 My point is that MINE IS THE SUPERIOR METABOLISM in all circumstances save this one. It’s only been since naturally-occurring clearings filled with grain grasses have been replaced by regimented fields of genetically-modified wheat stretching farther than the eye can see that being skinny has been a good thing.

And so I protest the modern concept of beauty.

I protest it uselessly and futilely. I protest it even though I myself admire slim-hipped women and sigh regretfully over pretty asses and wish I looked more like Twiggy and less like the Venus of Willendorf…

…but let’s get back to the point: My body is capable, strong, efficient, and famine-proof. Fuck the fashion industry (she said with the hypersensitivity of the overweight)!

I had this thought last evening when I was talking with lovely Barb at the opening of my sister-in-law’s art show at the Workhouse Arts Center in Lorton, VA. (Check it out; it will be up through February and it’s GLORIOUS. Lura Bovee – Building 10. You can see a portrait she painted of my husband Jonathan that is so good I almost cry looking at it – plus a huge painting of my gigantic son forging a spear. Bonus!)

Barb and I were talking fitness (because we are famine-proof so fitness is constantly consuming our energy and attention), and she mentioned that she walks her dog FIVE MILES EVERY DAY.

That’s a dog, not a plan. She doesn’t ever think to herself, “maybe I’ll skip the walk today and pick it up again tomorrow” the way I do with the gym. She’s got a barking, demanding alarm clock that won’t LET her not do her five miles – even if it’s cold. Even if it’s raining. Even if it’s snowing. Even if she’s sick.

And yet, there she was, waiting by my side for the next famine to clear out the supermodels so we would be properly appreciated for our luscious capability.

Barb ate nothing but fruit and veggies at the art show opening. She’s taking very good care of herself. I find her to be an inspiration. 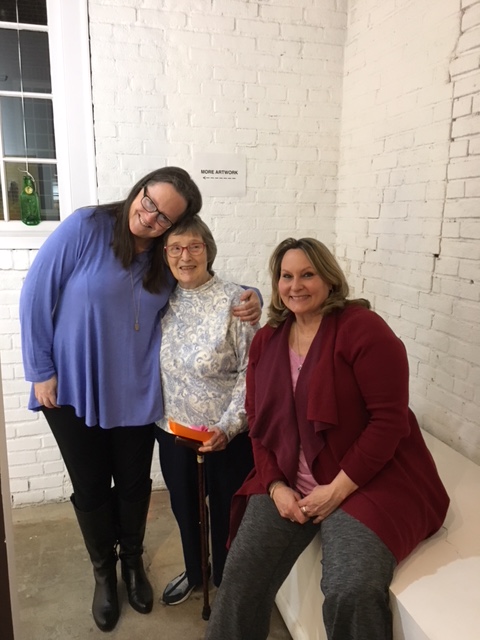 That’s me with Barb and my tiny mother-in-law, Alice. (Photo taken by the gracefully slim-hipped Susan, who you have to love EVEN THOUGH she wouldn’t last a month in a good famine.) Would you put money on who in this trio you think would survive a famine? Don’t count Alice out; that’s one strong old lady!