The devil came to me last night.

He arrived (or in this case, she arrived) not with a whiff of sulfur or with a writhing, snake-like forked tail. No, the devil came in the form of a perfectly charming waitress named Alexis. She was a delight; exactly the waitress you hope for. Friendly without looking like she was going to pull up a chair and dominate the conversation. Competent without being intrusive. Fast on the drink refills.

But then, she opened her smiling mouth and said it.

“So – did we save any room for dessert?”

For the last few weeks (okay – months), I’ve gone back to being sugar’s bitch. I’m still exercising every day; I’m still making good food choices; I’m still drinking plenty of water. But on top of all that, I’m also eating sugar like there was going to be a shortage and I needed to stockpile.

I remind myself of all the things I’ve learned about sugar – that it’s poisoning my system. That it laughs like a mad scientist as it absorbs all the zinc I’m putting in through pumpkin seeds. That it shatters the digestion. That my brain, addicted to the substance, releases a tiny drop of serotonin when it needs a hit, crooning to me, “Come on baby – just a little bump. I’ll do ALL those things you love for a container of Ben and Jerry’s.”

I know this, and yet somehow I have not yet come to grips with the oomph to go back to the virtuous life I found after working with Chip, the nutritionist at Body Dynamics in Falls Church.

And I know that if I could just say “no, thanks” even ONCE, then the next time would be easier…

…yet here came the devil.  “We have an outstanding turtle cheesecake tonight,” she said, wafting pure opium vapors under my nose. “Caramel, and a drizzle of chocolate…”

I am a FRAIL HUMAN – I have weaknesses. “I’ll have that!” I gasped like a man gambling the mortgage at the craps table; I’m SURE this is going to work out for me!!

And then do you know what happened?!

It might have been that Chip the nutritionist snuck into the restaurant’s kitchen and began messing with the staff. It might have been Barbara and Grace, the trainers, teaming up to knock waiters and cooks over, one kneeling quietly behind while the other pushed athletically from the front – BAM! Down they go, chef’s toques a’flyin’. It might have been Clara from stretch class, grabbing all the turtle cheesecakes and hiding them in the vegetable fridge…

…but SOMETHING stalled the arrival of my dessert.

“Where IS Alexis?” we asked, looking around the restaurant as if we were coming out of a daze. The sugar craving had begun to weaken.

The seconds ticked by. Then the minutes. “Dessert should have been here by now, right?”

And then Alexis appeared, apparently wanting to see just how much power the devil had over her acolytes.

“I’m so sorry – we’re out of the turtle cheesecake. So the chef is sending out a heavenly white chocolate cheesecake for you. Is that okay?”

It was like a phone call from the governor before the electric chair switch was thrown. REPRIEVE!

The devil looked both disappointed and embarrassed that she could not provide the offered temptation (the devil is really an extremely good waitress), but the craving had passed, and fate had intervened to give me a tiny little victory. A victory-ette.

And look – I said no once! This is definitely the start of something good!

Get thee behind me, Alexis! 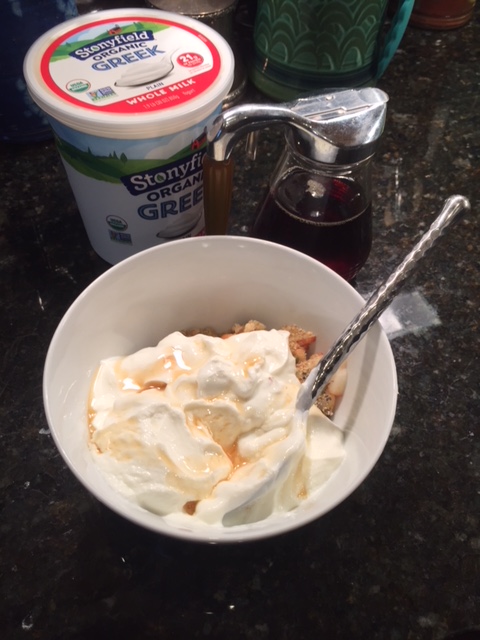 Who needs dessert when you have Chip’s spectacular breakfast? Fresh fruit, various nuts and seeds (zinc-rich pepitas!), a dusting of delicious wheat germ, the creamiest whole milk organic yogurts, and topped by a drizzle of the North’s life’s blood: maple syrup from the far reaches of Vermont. Pair that with a big glass of water and GOOD MORNING!