“Aspirin,” my mother would say in a significant tone, “is madly binding, dear.”

What she meant but was too nice to say out loud is that aspirin has a constipational effect on the digestive system, which – I find – is generally true.

You know what else gives that effect?

Say you have to get your car in to the shop for its regular maintenance by 11, and you’ve been lounging around enjoying not having to work out (Friday – I’m on my own on Friday), and the glorious breakfast mix of yogurt and fruit and nuts and wheat germ and pumpkin seeds and flax or chia seeds takes half an hour to create and then eat (because eating is a parasympathetic process which means don’t eat in the car) and is there EVER going to be an end to this sentence?

So I skipped breakfast. Yes, I know that’s a nutritional no-no. Just the first of many yesterday.

Off I went. Dropped off the car. Picked up a loaner. Zipped over to the mall to buy a new iPhone. THAT took a few centuries. It was 1:30 before I got out of there, and I was – show of hands who’s surprised? – hungry.

And what was right outside the Apple store? The devil.

Disguised as a kiosk selling – wait for it – BAKLAVA.

I mean, really. Could the devil BE any more obvious?! I know I haven’t been to the mall since 1987, but are there really baklava kiosks scattered about here and there like unexploded ordinance? Surely there’s a law against this kind of thing?

Wait. It gets worse.

“We can do them in threes or eights,” said the devil, in the guise of a perfectly nice counter guy.

The spirits of Barbara the trainer and Chip the nutritionist appeared at my shoulder. “Bail!” screamed Chip like a submarine klaxon when the ominous crack begins to leak. “Don’t get eight, whatever you do. You’re way too hungry to resist eight” said Barbara. My facial expression was paralyzed for a moment, and then I heard myself say “I’ll take eight, then.”

And then I ate them.

Every last one of them.

It took me a few hours, but they were a few sticky, bliss-laced, happy hours.

That was yesterday. Today, I’m down one high-fiber, nutritious breakfast and up several gallons of butter, filo dough, and honey. Like aspirin, I’m here to tell you: Baklava is madly binding, dear.

I’m off to spoon dry mouthfuls of wheat germ into my regretful mouth. 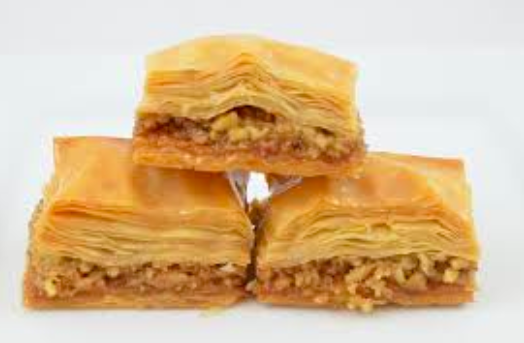 The moral of the story: Delay the service on your car until the last possible moment.