I’ve been sleeping by the clock for a week now. Lights out at 11; alarm goes off at 8 – no screens allowed between those hours.

Actually, no screens allowed between 10PM and 8AM, since Chip, the Body Dynamics nutritionist, says that the blue light of screens influences both the melatonin and the cortisol hormones – so no screens for an hour before bedtime, too.

Sometimes, I’ve found, I get rushed into the evening and can’t finish Rachel Maddow until AFTER 10PM, and then I tell myself I’ll just turn out the lights at 11:15 or 11:30 or whatever – as long as I’m out before midnight, I figure I’m good…

…but 11:00 rolls around and I’m so damned sleepy that I can’t keep my eyes open any longer and I give up and go to sleep.

This is highly unusual for me. I enjoy staying up late. Professor Bice, who taught Psych 101 a million years ago at the University of Virginia, told me confidentially (well, I was sitting in an auditorium with 299 other underclassmen, but he was a great teacher and I FELT like he was confiding a gossipy bit of news just to me) that somewhere in Scandinavia, where night lasts all winter long, some scientists set out to assess a truly uninfluenced sleep cycle.

So they took some willing grad students and put them in bunkers underground and totally isolated them. They had food for three months and all the school books they could want to study for their final exams.

(What kind of schools in Scandinavia were these? Where you could be absent from class for three months and then show up to ace the exam and everyone was fine with that? Maybe they were working on doctoral dissertations down there in their bunkers; I don’t know.)

And then they tracked when the students went to sleep and woke up by monitoring when their lights were on or off.

I don’t remember the results; it was something like when allowed to adjust to their own rhythms, the body’s hormones didn’t really like a 24-hour cycle and preferred something different. What, you may ask? I’m sorry – I was a terrible student. I don’t remember. But the concept has always stuck with me: What would YOUR body do if you had no sunrise/sunset, dinner to make, Good Morning America? What would your natural rhythm REALLY be?

Of course, we don’t live in bunkers. (At least, I don’t. I make no assertions about you!) And there ARE cues that begin or end our days. And I’ve now, after seven days, got the “go to sleep” cues all lined up and working for me.

I’m still missing the “get up” cues. So for the second week of my two-week experiment, I’m self-imposing EVEN MORE DRACONIAN regulations.

When the alarm goes off, I don’t have to leap out of bed immediately – but I can’t pull over the iPad to check messages or Facebook or any other form of delayed rising. I can lie there and admire how nice it feels when my hip flexors aren’t on high alert, but that’s it.

Then and only then can I delve into the electronic world.

I’m thinking that by holding off on “what happened during the night that I missed?” until I accomplish that list, I’ll be a little more zippy in the early morning half-hour. And that, as much as the time the alarm goes off, should influence the cortisol to come on stronger and help me wake up perky after a great night’s sleep.

Because I don’t live in a bunker and I can’t just sleep and wake as I please. So why not let all those external cues work FOR me for once?! 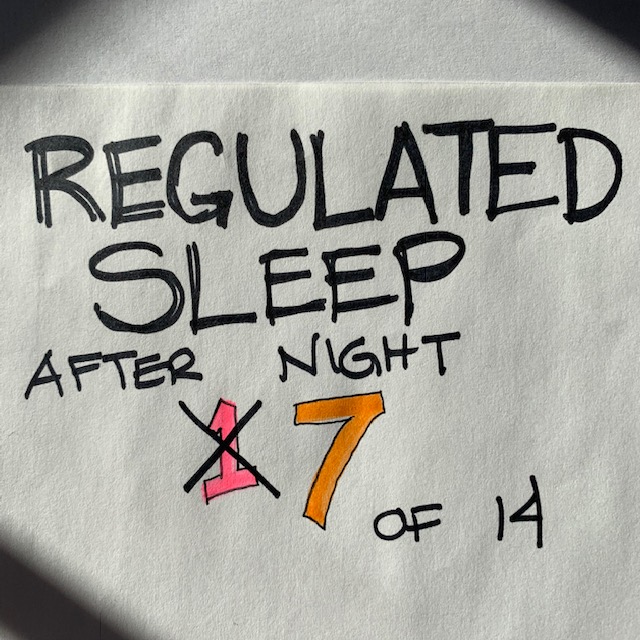 Note the shadows in this photo; the sun only hits my office desk in the morning, when I’m rarely awake… or at least, when I used to be rarely awake. Isn’t this a bold and dramatic shot? Pretty – sunshine! I feel like a healing vampire.

6 thoughts on “Regulate after NIGHT SEVEN”