Above the swirling bodies in the club, sporadically plucked from the darkness by the spinning lights, is the god of raves, the master of beats, the silent hero amid the cacophony:

Always shown wearing headphones – and frequently really, really long dreads – the DJ is the acme of ultra-cool, matched with a technical nerdiness that transcends fashion or style. He (or she) holds every dancer in the palm of their hand, able to change frantic tempo, pulsing beat, grinding rhythm, MOOD with the flexing of one long, spider-like finger…

…unless we’re talking about putting together a playlist for Balance Class.

Barbara (my personal fitness guru and the Balance Class professor) does not object if I act as DJ for class. So every week I spend happy hours thinking up what we’re going to listen to. When my buddy Steve is in residence, he and I swap off as DJ – but he’s been temporarily sidelined, so it’s all me at the moment.

And this gives me SO MUCH JOY.

I think some people are completely indifferent to music in class, and some people are energized and powered by it. As for myself, I am ruled by it. If we’re doing an exercise that’s whipping me, I can be completely reenergized by a great song. NOBODY enjoys my playlists more than I do, and if I have any breath at all, I usually sing along. Sometimes loudly.

You can’t sing Pink quietly. Sorry – I meant P!nk. (A name that really messes with the spell-checker.)

Steve set an incredibly high bar by creating themed playlists. “Songs with lots of brass.” (Which he did for me because I LOVE a good brass section.) “Songs produced by Peter Asher.” (We cursed him when he finally announced the theme when no one could come up with it. He knows TOO MUCH about music.) His best was “Name the link between these two songs.”

When you’re sweaty and gasping, it’s a wonder and a glory to have a mental puzzle to figure out. It distracts you from the exhaustion. He played “Jolene” by Dolly Parton and followed it up with “Wrecking Ball” by Miley Cyrus, and we were all stumped. Finally he had to tell us that Dolly is Miley’s godmother.

Yeah – too much knowledge…

But the theme concept is so much fun. I’ve done (checking my playlists now) an all-covers playlist, one that was all Beatles or Beatles covers, colors, girls’ names, places, songs by people who use a pseudonym (like Elvis Costello or Sting), movie soundtracks, and weather phenomena. Sometimes I tell the class the theme; sometimes I try to make them guess.

It’s trickier than you might think, because you can’t throw on any song. The class doesn’t love contemporary music; they respond best to disco or earlier. It can’t be inappropriate (Barbara looked at me in alarm when a song had profanity in it; she’s not prim herself, but she has to protect the sensibilities of her students, and I respect that). It has to have a driving beat and a lot of energy… so if you try to do a playlist that names every person in the class and you want to do something for Beth, you can’t dredge up that syrupy surprise from Kiss. That’s a BAD balance song. (And a bad song.)

I had to finally go with “The Boys Are Back” by Thin Lizzy, and then it turned out that Beth wasn’t short for Elizabeth, so the very long stretch of “Lizzy” wasn’t at all accurate… but everyone enjoyed that playlist. I did “Dear Prudence” but by Siouxie and the Banshees for me; the class agreed it was disturbing… which entertained me. Siouxie Sioux’s version has a LOT more energy for Balance Class than the original by the Beatles. I win.

The song that got the most people singing along ever? Creedence. Here Comes the Rain, from the weather playlist. Go figure.

Last week, Barb (not the teacher – this is another Barb, and a true Sister in Sweat she is, too) requested a Queen playlist. Fun!

Only… all that wild experimentation Queen did, it turns out, renders MANY of those songs ineligible. Those guys were changing tempos ALL THE DAMNED TIME. This would be the kiss of death if we were trapped doing Barbara’s infernal “Empty the Dishwasher” move.

(Squat down and reach down to your left. Stand and reach up to your right. See? You’re pulling a plate from the dishwasher and stacking it on a high shelf. Barbara will NOT allow you to pull multiple plates from your imaginary dishwasher and stack them to move them all at once; I’ve tried. The point is, if you can get into a rhythm, then unloading an impossibly high number of invisible plates from a non-existent dishwasher is more bearable; you just can’t have music that makes you go speeding up and slowing down.)

(Do I need to point out that after you’re done unloading THAT dishwasher, there’s another one on your right, with empty shelves above you on the left? Barbara is VERY symmetrical in her Torquemada-like excess.)

So I’ve varied the Queen playlist; now it’s “Flamboyant Performers.” I’ve got eight good Queen songs (we’ll do our warm-up to the wildly-varied tempo of Bohemian Rhapsody; I’ll be watching to see how many people sing along), and I added some Elvis Presley, Elton John, Lady Gaga, Madonna, and Adam Ant. There’s a P!nk song because she is just astonishing in concert. And I polished it off with Adam Lambert, who the surviving members of Queen chose to go on tour with them because his voice is close to Freddie’s. His solo work is very high energy. 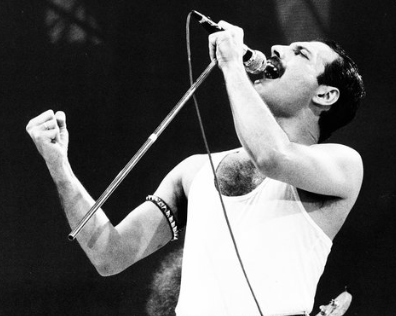 Anyone got a good idea for a playlist theme?