It’s a very odd thing for your thigh to fall asleep.

A foot, sure. Standard operating procedure for someone who likes to read on the toilet; you get up and have to stomp around like Frankenstein until circulation is restored.

Maybe you sleep too heavily on your arm and when you wake up, your hand is asleep. A few brisk shakes and all is well.

But for a part of the body rather closer to the trunk to fall asleep, all by itself and uninvited, is – well, it’s odd.

Eighteen hours later, the “asleep” feeling had crept, like the Blob, from the thigh up to my ribs on one side and down to my feet. On the other side, it went from just below my waist to my toes. It wouldn’t be dismissed by brisk walking; in fact the brisk walking was challenging since I couldn’t exactly feel my feet.

That stopped being just odd.

So my husband and I toddled off to the emergency room, where for once I was the patient, not the loyal attendee clutching the backpack full of iPads and sweaters and lists of medications.

(No, I’m on no medications. This shortens the check-in process considerably. Jonathan’s list of medications by this point was longer than my arm and we had to keep it written down and updated electronically.)

The ER staff sent The Stroke Nurse in to see me. I’m quite sure that’s how her title was written – The Stroke Nurse, in all initial caps. She was a brisk, efficient woman determined to identify signs of the stroke they were sure I’d had.

Well, I could have told them it wasn’t a stroke. Except for feeling like my lower body was asleep, I was as right as rain.

But I squeezed her fingers and did all the other stroke tests. Two or three times, in fact, as she seemed disappointed that I wasn’t living up to her expectations.

Finally they decided I had Guillain-Barré syndrome. Rapid onset muscle weakness caused by a hyper-vigilant immune system that decides to attack the myelin sheath around the nerves.

People with GBS (and I actually don’t think that’s what I had) sometimes discover the muscle weakness gets into the lungs and they suddenly can’t breathe, so The Stroke Nurse backed away and the admissions team rushed forward, vast laptop computers on rolling desks, to gather me into the antiseptic, plastic-mattress embrace of Inova Fairfax Hospital.

Despite feeling absolutely fine, I was kept there for a solid week. People who have amputations get booted after a day, but not me. I sat around in a hospital johnny and wrote my projects on my laptop (advantage of being a freelance fundraising copywriter; your office can be anywhere with a flat surface and an internet connection), and fielded the sometimes tearful fears of my family. (My in-laws tend toward the immediate disaster scenario.)

The physical therapy team put a broad belt on my broad waist and nervously walked me around the hallways and up and down stairs, their skinny-girl arms outstretched to catch me should I go over. “Honey,” I told them, “If I start to go down, you’re just going to want to stand back and call ‘Timber’ to warn passers-by. There’s no way YOU are going to stop ME from falling.”

No, they were quite sure I was going to fall, and that they were going to save me. As it happens, I was teetery and uncertain, but I never fell. Not once.

(Secret weapon? I’d been taking Barbara’s balance class for over half a year; I already had the muscles to keep myself upright even while Frankensteining all over the neurology wing.)

I had CAT scans and MRIs aplenty. I’d say in that week, I spent maybe six hours inside a chilly white tube while invisible, whirring machinery thunked loudly around me. I had a lumbar tap; three times unsuccessfully in my hospital room and the fourth time (we hit oil!) in the radiology department.

A nerve guy wheeled in a lightning-in-a-box machine and stabbed my legs with a needle while zapping me to chart the nerve conditions. (Result? Huh. Everything looks fine.) (Yeah – I keep telling you that!)

And my neurologist put me on day after day of intravenous immunoglobulin (called IVIG for short). This is the concentrated health of about a hundred people in a bag; it ought to be the most revered substance on the planet. Enriched plutonium, take a back seat. I felt very guilty having all that donated plasma dripping into my arm. Really, I feel FINE.

You’re not fine, intoned the neurologist.

She’s a lovely lady – kind as she could be. She explained that GBS resolves itself once the nerves can regrow that myelin sheath. She and Jonathan bonded immediately. “It will take up to 18 months,” she shook her head at my husband. They both regarded me like a moderately interesting exhibit at the zoo. “It won’t take HER that long, though. She’s positive.”

She said it as if my optimism was a character flaw. Jonathan and the neurologist, both of them prone to negative thinking, shook their heads at each other in an unexpected accord. Positive people – what can you do?

After six or seven days, they decided to spring me. (Maybe I’d run through the hospital’s precious IVIG stores.) Nothing had changed, but I guess they were reassured that I wasn’t going to stop breathing. Home I went to slowly heal.

I got better at staggering around; I did the physical therapy department’s take-home exercises (which weren’t a patch on Barbara’s balance class tasks), and I got used to Jonathan’s outstretched arm whenever we went anywhere. Again – just call “Timber” and stand back. But I never fell.

Barbara suggested I meet with Gwynn, the therapeutic masseuse at Body Dynamics.

Our first session together was such an eye-opener that I’ve been going back every week ever since.

Gwynn was the one who explained the fascia to me. “You know that white film around a chicken breast?” she asked. I nodded. “That’s fascia. It’s everywhere – all over your body. It’s supposed to be supple and like a liquid, but sometimes it stiffens up and gets hard. Your fascia feels… odd.”

There we were, back to something feeling odd again. Sounds familiar.

Gwynn put her hyper-intelligent hands on the back of my leg, right above the knee. “This feels… like there’s a bag of oatmeal in here.”

A week in the hospital, million-dollar machinery fired up, techs and specialists and physical therapists on demand, and none of them found the “ground zero” of my condition. Gwynn did that.

“I never knew it until just now,” I said, face-down on her heated massage table, “but that’s the spot that is the most numb. I think that must be where this whole thing started.”

Gwynn was silent as she did her Braille thing on my muscles, every inch of her focus in her hands.

“It’s the fascia,” she finally said. “Something’s going on with your fascia.”

“No – it’s like potholes in the myelin sheath. That’s what the doctors said.”

“I don’t doubt it, but there’s also something going on with the fascia.”

At my follow-up visit with my neurologist, I asked her what the intersection was between GBS and the fascia.

“I DO think so,” I insisted. “It feels like – I can feel my skin, and I can feel my muscles, but there’s a layer of numbness in between the two. That’s fascia, right?”

She nodded doubtfully, but I could tell she wasn’t persuaded. I went on.

“This is your Nobel Prize in Medicine right here. You should investigate the role of fascia in GBS.”

“Well,” and here she looked to Jonathan, also regarding me doubtfully, “I’ll look into it.”

She never took it seriously. Oddly, while there are specialists for every random nook and cranny in your body, there are NO faciologists. Which is weird, because fascia is everywhere; even in your brain. Apparently the fascia has been entirely abandoned to the tender ministration of massage therapists…

…who thankfully know what they’re doing.

So Gwynn worked on my fascia and my numbness faded so quickly that the neurologist reconfirmed her mildly-contemptuous view that it was my positivity that was doing it.

Fine. She doesn’t want a Nobel Prize, I’m not going to force one on her.

And BARBARA had already equipped me with the muscles that kept me upright.

It’s been less than a year since I first brushed my thigh and wondered at the sensation. The numbness is pretty much gone on the left side. The right side is down to about 20% of the original sensation; now it feels like a silk scarf over the skin of my thigh and a bit of my shins. Not a bad sensation; things could be a lot worse!

Here’s a photo of my IV stand, CLEARLY designed by someone at Industrial Light and Magic with a sense of humor. Could this look MORE like a helpful Star Wars robot? Roger-roger. 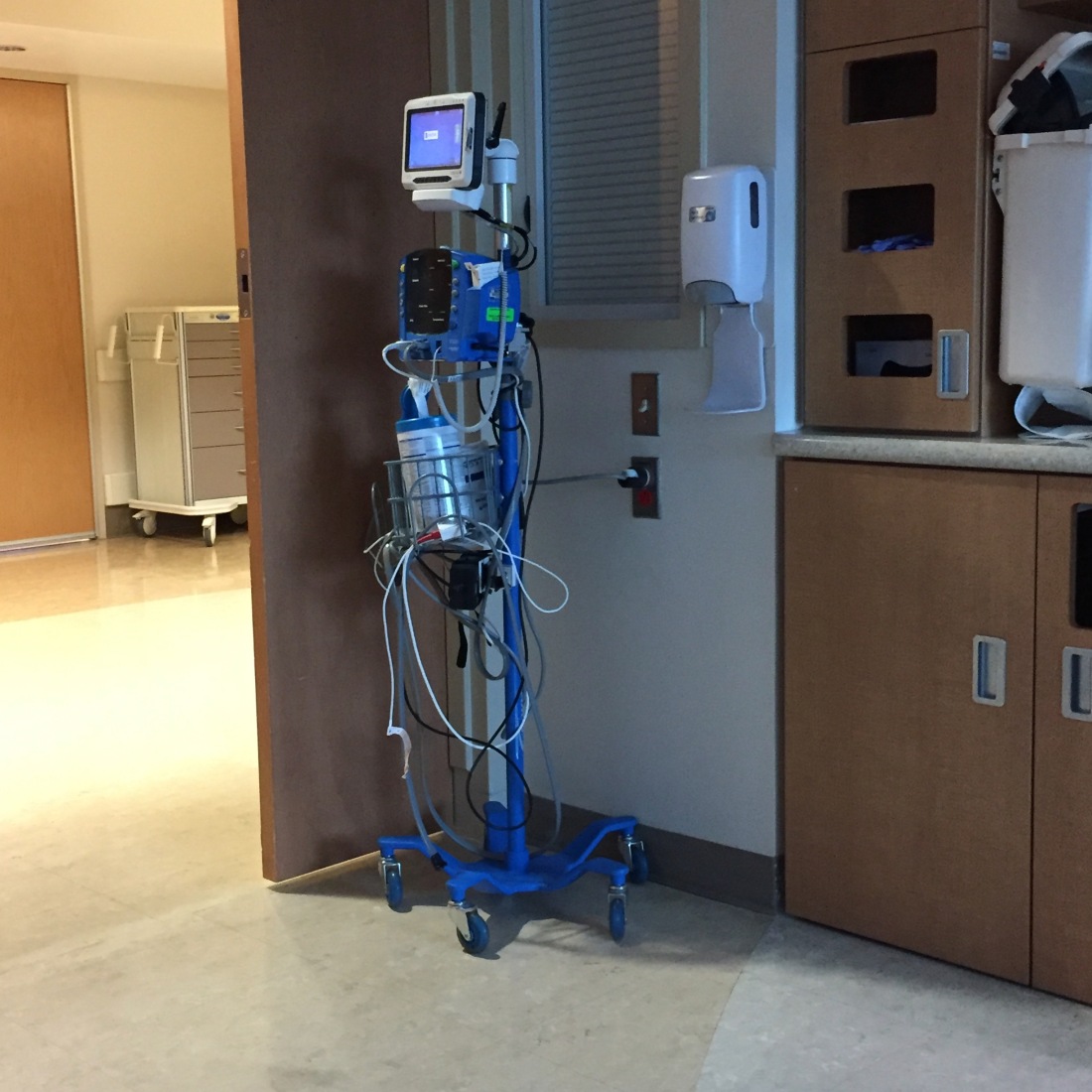