Every time I hear eager reporters shout out “Who are you wearing?” to dolled-up celebrities attending the Oscars or some other gala event, it makes me snort. It’s as though everyone was following in the footsteps of Jame Gumb, from “Silence of the Lambs,” in his quest to make a girl suit. It sounds as though the interviewee was a cannibal tailor who was just about to name the donor of whatever skin they were wearing…

…but the fact remains that who you’re wearing does, indeed, turn out to be important, at least on the surface.

Patrons at Body Dynamics, in Falls Church, VA, almost never wear purpose-bought athletic wear. A t-shirt and sweats or shorts is the general rule; some of the ladies in my Balance Class on Thursdays at 10 are far more elegantly put together than that.

Even the staff dresses more for lunch at a nice restaurant than for working out. It’s the least intimidating gym on the planet.

But it does mean that when I show up to Balance Class in the extremely serious get-ups that my clever sister Twig found for me (Twig works out at a much more traditional establishment, where people wear form-fitting cloths that wick, or whatever else signifies garmentry purchased specifically for working out), I’m the only one in sight in something less than casual and comfortable. And if it’s my turn to provide music (Steve and I fight for the chance to DJ), I go right to the sound system and start setting that up. So new patrons have twice asked me if I’m the teacher.

I think of all that Barbara knows – of how she can cure an ache or correct a flaw by doing something seemingly unrelated to the muscle in question because Barbara knows how all the strings in the body are connected – and I am overwhelmed.

And then Barbara walks in, looking pretty and slim and confident, and I want to say to the new person, “See? THAT’S the wizard. She’s wearing a beautifully-tied scarf and pretty street shoes. I know she doesn’t LOOK like a wizard, but just wait.”

Who you wear is definitely not the point at Body Dynamics. Who you wear couldn’t matter less.

Here’s me apparently looking professorial. At 230 pounds (down 30 from 17 months ago), I’m feeling slim and very strong! 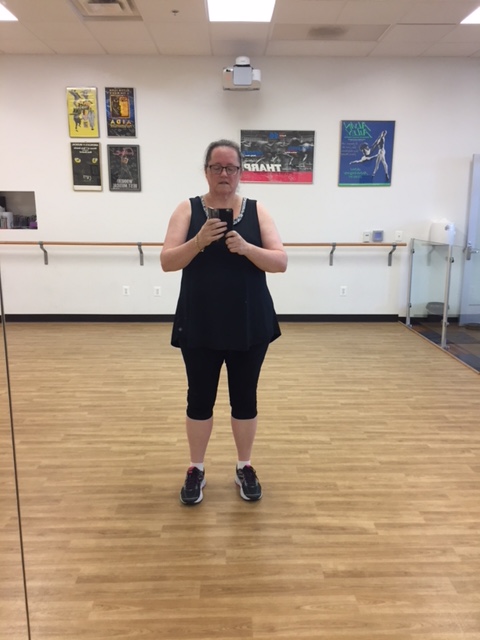