I ran a 5K yesterday.

Let’s count the number of things that can be wrong or misleading in a five-word sentence.

First, the word “I.” That’s correct. I WAS the subject of this sentence. Yay! We’re one for one.

Next, the word “ran.” That’s hugely misleading. In fact, I ran a little and walked a lot.

The weather broke yesterday and the air was cool and brilliant. I thought that almost certainly now that it wasn’t humid any more, I was sure to suddenly be a brilliant runner… so instead of going for the run-a-tenth, walk-a-tenth plan I’ve been working, I just started running. I passed the first tenth-of-a-mile line on the pavement with a jaunty wave – toodle-oo to you!

Then, as I neared the second tenth, there were two women walking in front of me. This poses a problem. I don’t want to stagger past them, huffing and panting – yes, that’s how long it took to go from jaunty wave to stumbling desperation – and then suddenly come to a crashing halt in front of them like an oblivious shopper at the grocery store who leaves her cart in your lane and walks off to examine cans of soup EVEN THOUGH YOU’RE RIGHT THERE.

So I had to jog past them. “Pardon,” I gasped; they grudgingly gave way a bit. Their ‘tude was enough so that I had to keep going, to prove I was such a dedicated runner that I NEEDED to push them over to one side of the path. I must have jogged somehow past the three-tenths of a mile line without seeing it and was staggering along like a fool until I saw four-tenths in the distance and decided that was enough… after that, it was walk-a-tenth-jog-a-tenth and be damned for the lack of humidity.

The path around the lake is 1.5 miles. The walking part was so much more endurable than the jogging part that I had a bright idea at mile 1.2 – I would take a SECOND LAP around the lake at a walk. Enjoy the dry, cool air. Relish the fact that I wasn’t jogging. Step gracefully to the side to model polite behavior when some poor bastard jogged past me. What a brainstorm!

Lack of oxygen at 1.2 miles can cause us to make these foolish decisions.

I got to the end of my jog and fished around in my wee little running belt, wherein resided my car keys and the perfectly enormous new iPhone I bought. My son warned me; don’t get the Ten. You’ll regret it. I hate it when my teenager knows more than me. He was RIGHT; this phone is too damned big.

I finally got it out without losing the car keys, and attempted to tell the running app that I was done with THAT loop; now I was going to walk a loop. You’re supposed to be able to do that. Barbara can do it.

It wouldn’t listen to me. It just kept insisting that I should “continue.” All right – fine. I will “continue” and simply understand that my per-mile pace was going to tank as I walked the second loop.

I noticed during this struggle that I made it below a 15-minute mile yesterday; I think it was 14:51. You’d think I’d know… but I don’t. Because for some reason the app refused to record the second loop. I don’t know why. So at the end, when I was gasping at the car, it showed NO data at all. I deleted it. Then it took away the 14:51 it had registered on the first loop. Just kill me now.

The entire journey – about 3.1 miles, all in – took me almost exactly ONE SOLID HOUR, which seems like an awfully long time for twice around the pond.

Wait – wasn’t I diagramming a sentence? Where was I?

I ran a 5K yesterday. Right. We’re up to “a 5K.” That’s deceptive. I went as far as a 5K, but I did it all by my onesie, see? And apparently there’s something magical about running a 5K – being a part of that grand collective of people all grunting and panting and sweating together – that makes people want to do it.

I don’t want to do it. I think I will spend my time worrying about (a) whether I will trip anyone, (b) whether anyone will trip me, (c) if anyone is annoyed by how slowly I must go, (d) how much you have to bribe a judge to not record any time at all, (e) why I am doing this to myself, and (f) my God, I must be done by now.

But the distance I traveled yesterday – wondering about the state of my calves, thinking about Timothy Olyphant’s hips (it helps me turn on my glute medes to think of the way that man walks) and Will Smith’s butt (I have “Gettin’ Jiggy With It” on my jogging playlist; don’t judge) – was, in fact, just about the same distance as a 5K. Which I mostly walked.

Where does that leave me?

Final grade: Partial credit. Does that mean I don’t have to run a 5K with people?? 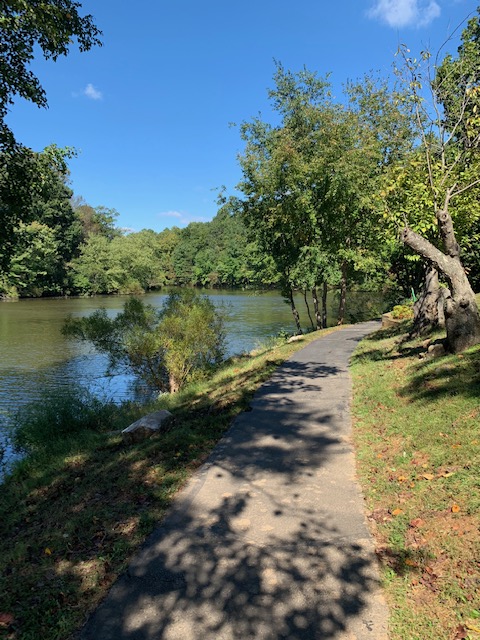 It really was a gorgeous day, though. Can you feel the cool, dry, benevolent breeze blowing in my face from this photo? I took the picture on the second, walking loop. There was NO WAY I could fight that stupid phone out of the belt during the jogging/panting/cursing portion of the course.