From a very early age, my son (probably the whitest white kid you’ll ever meet) could do a dead-on rendition of “Brick House” by Rick James.

It’s ingrained in your soul. You know you know it. She’s a BRICK. (augh) HAUWWWWS. She’s mighteh, mighteh, just lettin’ it ALL hang out.

But the truly insidious part is the little bragging scream in there when he funks out “Thirty-six, twenty-foah, thirty-six – aughwww, what a winnin’ hand!”

I can sing it. I can even dance to it. But I can’t get past those numbers. That’s a winning hand?? Really, Rick?

My waist – my WAIST – is forty-four inches. I don’t even know what my bust and butt is – I don’t think the tape reaches that far.

Of late, I’ve been nattering with friends about the importance of the non-scale victory; that is, it’s critical that you don’t measure your health by stepping on a scale. That’s like trying to figure out the temperature by looking at the humidity. Yes, they’re connected – but they’re not the same thing. And the scale will tell you you’re doing well when you’re approaching malnutrition while it will make you feel bad even though your health is improving. The scale is a LIAR.

No, there it is. It’s this: RICK JAMES IS NOT A GOOD ROLE MODEL, girls and boys.

And a figure that measures 36-24-36 is NOT the only winning hand. Larger numbers can dance like a whirlwind, too. (Sometimes, just as destructively, ho-ho.)

I’ve walked away from the scale. Now I’ve got to walk away from the tape measure, too. There’s a LOT of walking away when you’re cleaning out the attic of your brain, where all the out-of-date crap keeps gumming up the works! 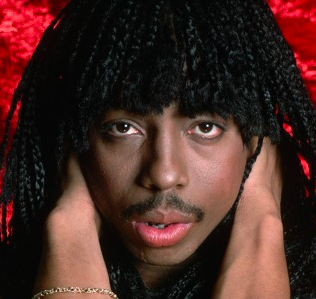 I came VERY close to posting a photo of Dave Chapelle as Rick James. In the end, I went with the actual musician, even though Dave’s version is hard to turn away from.

DAMN IT. Victoria Heckler has pointed out that “Brick House” is by the Commodores. Well, NOW what should I do??! All 53 of my followers could be misled!