I am abiding by the letter – but not the spirit – of sound nutrition.

That is, I ate my yogurt for breakfast. You know – nuts, seeds, fresh fruit, wheat germ, OG WMN SPY.

I drank a big glass of water.

And then I delved into the Hallowe’en candy.

No, I didn’t buy it for trick-or-treaters. To my sorrow, I get maybe three every year; I tried handing out the biggest candy bars I could find in the hopes that news would spread, but it never did.

Now the idea of carving pumpkins all by myself is too depressing. Not that the boy or the husband would have enjoyed carving with me, but I would have forced them to make jack-o-lanterns with me and they would have submitted. Now one is in college and the other is dead, so my favorite sport of pumpkin-carving has been pretty much permanently shelved.

And without a pumpkin hopefully glowing on the front step, even my three lone trick-or-treaters won’t bother.

So I bought the candy FOR ME in a very weak moment. I’ve been grazing on it all weekend.

And now I have this extremely cool work project to do and I find I have NO OOMPH. It’s like my willpower is being fueled by…

Oh. I get it now. The sugar is affecting my MOOD as well as my BODY. The yogurt breakfast isn’t helping me; it’s barely holding the line against a perilous descent into a powerful sugar-induced coma.

Damned sugar. It is a LOUSY nutritional partner! 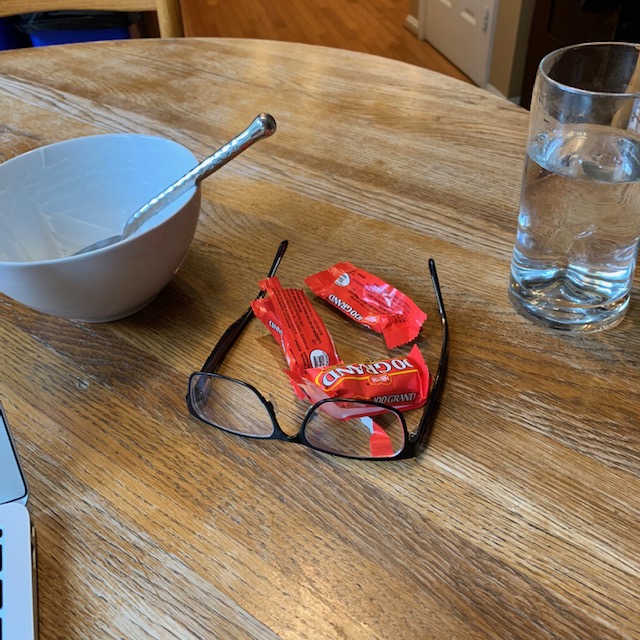 It’s like sugar is a huge guy named Bubba and I was just ushered into gen-pop prison as an object lesson to other white-collar criminals. You’re mine now, grunts Bubba, in the guise of Hallowe’en candy. First, braid my hair…